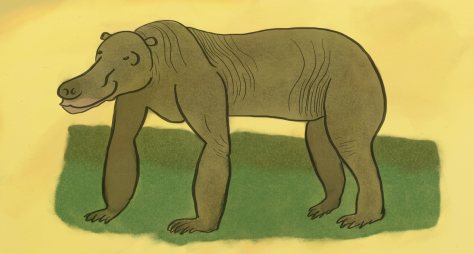 I want to try something different on this rebooted The Lord Geekington. I have nothing new to add to my discussion on Bergman’s Bear and Hyper-Splitting, but I also didn’t feel like I was quite done with it. Also, I recently got a drawing tablet.

So what is supposed to be going on here? This is a dubious speculative creature, so I wanted the illustration to feel anachronistic and naive. Trying to put my own inexperience to good use, in other words. I attempted to imitate the old yellowing maps in Sea Monsters on Medieval and Renaissance Maps, Medieval illustrations of bears, and Olaus Magnus all at once, although the result doesn’t really look much like any of those.

I exaggerated the short hair purportedly covering Bergman’s Bear to the point where this bear hardly seems to have any. Like my shrink-wrapped bear, this is really an excuse for showing off the freakishly long legs bears have underneath that fuzz. The wrinkles may look familiar to aficionados of hairless oddballs. The long snout is an exaggeration of the morphology Kamchatkan Brown Bears already have; I’m imagining a short-haired animal could look similarly bizarre, but just in case, I’m imagining this is an animal with particularly extreme morphology. This feature was also something of a protest against the prehistoric-survivor-mongering Arctodus¹ hypothesis.

Unlike the Cryptozoologicon, I’m not clever enough to come up with a scenario where this can be a distinct species². The best I can manage is that, let’s see, maybe there was a subpopulation of bears that was extremely adept at exploiting salmon — or maybe marine mammals? —and for some reason insulated themselves with more fat than fur. The longish snout I gave it sorta hints at this, although Bergman and Malaise made no mention of such a feature. But anyways, this purportedly distinct animal is just a relic from the era where people were interpreting one bear species as hundreds; there is absolutely no reason to take it seriously as a potentially unknown animal. Just thought I should mention that again.

¹ Although Arctodus didn’t actually have a short face. Or long legs. The popular image of these animals is nearly mythologized as a cryptid.

² Well, it was recently discovered that Cave Bears were living in far Eastern Siberia… of course they were small… and hundreds of kilometers away from Kamchatka… and thousands of years in the past. Such inconveniences don’t really stop avowed prehistoric survivorists though.